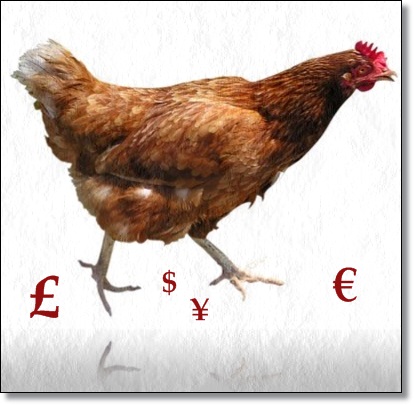 While taxes are key to building the foundation for a strong economy,  for starters, one basic rule of tax is that you target on sources where you can generate more revenue at very low cost. The “Kuku Tax” does not seem to meet this criteria. The Kakamega County officials ought to listen to the Luhya record “Likuru” and be prepared for the type of resistance and consequences to follow….what I will here call the “Likuru Effect.” (Those interested in listening to this record can visit https://artist.maestro.fm/Likuru.html) As such, populist resistance should be expected, and that will be the start of losing popular support for popular County government programs and agendas.

Secondly, there is what we call the backward bending “Laffer Curve” which typically shows increasing total revenues collected as additional tax rates are added.  For example, a 1% tax one 100 will generate 1 shilling while increasing to 2% would double the tax revenues, and hence more for the government collection. Obviously, at this rate, most of us will simply work harder to generate compensating incomes to maintain our standards of living. But to a certain point, increasing rates simply lead to less revenue as taxpayers opt for leisure instead of working or producing, lest their hard-earned money is snatched by the tax collector. For example, below 30% tax rate, most Kenyans are likely to keep working harder to generate more income to meet their standard of living while at the same time; the government will collect more money than it would have with say, a 10% tax rate.  However, should the government become too greedy and ignorant at the same time and charge ridiculous rates, say at 100% tax, it will only collect zero tax as no one will be willing to work or produce. I will call that the “tupu (or empty) effect.” County officials should check out where the old Soviet system ended up with that sort of philosophy.

Thirdly, the issue of “pareto optimality” can be invoked here.  This simply argues for a redistribution that makes one better-off without making another worse-off than before. Crudely put, the original philosophy of contributing towards the creation of taxation was that if you take one shilling from a millionaire, the millionaire will not feel anything and is thus not worse-off at all. But that shilling transferred to a pauper who has only one shilling doubles their income (100% gain) and thus makes them better-off without making a millionaire worse-off.

Let us call this the “usawa (fairness) effect.” Obviously, this could be in form of government programs or even direct cash, but as I said, we don’t want to go to the expenditure side of the equation yet.  What happens if our County officers get carried away and come up with many creative ways of collecting more revenue? The answer is simple….increasing tax for our millionaire from one shilling to one million shillings, will yield no revenue for the tax collector to support the pauper (the tupu effect), and it penalizes the millionaire (the usawa effect). In the case of the “Kuku Tax,” even the pauper is being asked to pay the little they have, thus creating discontent (the Likuru effect) at the grassroots.

Now if taxes are are supposed to benefit the pauper by taking only reasonable amounts from the millionaire, how can we explain the “Kuku Tax,” especially given the allowances that our politicians, including County representatives have been scheming for with greed? I recall the tragic folk tales of the greedy hyena at a road junction and the greedy dog with a bone looking in the river and seeing another dog in the water with a bone. Our County officers may want to take a page from the French History about Marie Antoinette’s naivety and the price she had to pay for her stupidity.

The “Kuku Tax” is a big mistake, scandalous, and I hope it is not a reflection of the caliber and ignorance of our leadership.

This article has been read 2,110 times
COMMENTS