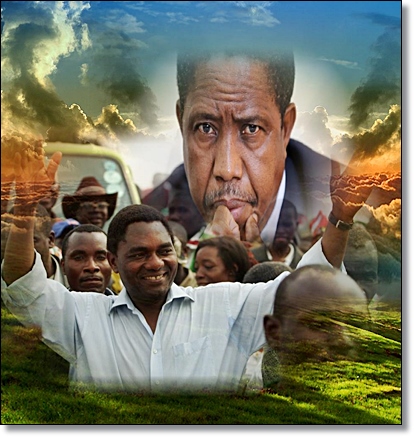 Joshua Ignla is a Nigerian prophet who once prophesied accurately that Edgar Lungu would win the 2015 elections. He then prophesied falsely that Goodluck Jonathan would win the Nigerian elections; Jonathan was defeated. He is on record that President Lungu will win the 2016 elections and then die after two years in office. Another Nigerian preacher (as if it is now a new Nigerian quick-fix) Prophet TB Joshua prophesied claiming that the PF would win the 2015 elections “but there will be petitions.” But, of course, it was not clear whether the “petition” referred to nullification petitions or petition to have President Lungu deter the 2016 elections. All in all, there have been some legitimate prophecies concerning the Zambian elections. In this short article, I will discuss whether prophesy is a necessary condition for plural politics in Africa.

Should prophecy be relied upon to predict political elections in Africa? For certain, our Christian Bible is proactive when it comes to national governance and leadership: “Choose for each of your tribes individuals who are wise, discerning and reputable to be your leaders,” (Deuteronomy 1:13). In 1 Samuel and beginning from verse eight, we have a demand the Israelites made for a king, “to lead us, such as all the other nations have.” God gave them Saul and with a caveat that he would claim to rule “as his rights.” Saul failed both God and the people and in his place David was anointed to rule.

At one point God explains to Samuel that the people of Israel had rejected him as King over them in preference for a human king. God further warned them that with a human ruler, the Israelites would be forced to abdicate their wealth, surrender their lands, lend their progeny to regal servitude and pay hefty taxes. The assumption was that God’s rule was with justice, fairness and equity, but man’s would lack these tenets.

But in Isaiah 33:22, a poignant political character of the Creator is revealed: “For the LORD is our judge; the LORD is our lawgiver; the LORD is our king; he will save us.” Here, God introduces himself as a government: He is the Judge (Judiciary); the lawgiver (Legislature); and King (Executive); but God is also the one who defends (commander-in-chief). Since after Saul God would not rule his people directly but through other people, we can only assume that this “Separation of Powers” would only be meted through human rulers. And across the ages, men have devised political systems that have worked. Democracy is perhaps the best of all other political systems ever invented, but by no means without flaws.

Thus, humans have allocated the functions of law-making, law-enforcement, law interpretation as well as commanding over national armed forces through three branches of distinct personnel. This way, God’s warning against an absolute monarchy with inflated powers has been curtailed. Christians now have new instructions in regards to political determination: “Every person should obey the government in power. No government would exist if it hadn't been established by God. The governments which exist have been put in place by God (Romans 13:1). Three truisms emerge from this verse. First, obedience to government is expected. Second, God establishes governments. And third, God is somehow involved in the choice of governments. The first two are easy to presume, but the third is illusive. Just how does God involved in the elections of governments for him to “establish” them?

It seems he does so again through people. When people elect a government, God has spoken however illegitimate it may seem. But that does not mean that political parties should rig elections and subject the electorate to indecent tactics. Considering God’s holy nature, it would be only reasonable to adjudge that only governments elected through a fair and free electoral process should be “established” by God. Sadly, the Bible seems to suggest that that is not the case: All governments are ordained of God. The onus, therefore, is on people to ensuring that their electoral procedures are sane, just and transparent. Those who flounder, if investigated, prosecuted and found wanting, should be punished.

The cardinal question still remains: Should we rely on prophecies to predict election results? By any means “yes.” This is owing to the fact that it borders on freedom of expression, speech and, possibly, assembly. Democratically, however, and only for practical moral reasons, should not a preacher whose congregation include people of different political affiliations be cautious in how he devours this issue? The two Joshuas, for example, can easily prophesy as to the outcomes of Zambia’s elections. They are not Zambians, and perhaps do not have established churches in Zambia under them. But as Ignla’s words have come to haunt, if his words fall short or some congregants in his church who did not support his endorsed candidate do find out, they may be offended, and possibly leave his church.

There are big congregations in Zambia. Bread of Life Church under Bishop Joe Imakando (a true and faithful man of God) is one of them. This church is multi-tribal, anti-partisan and supports people from all walks of Zambian life. It would, for example, be imprudent for Bishop Imakando to publicly announce support for one candidate over the other. This might plunge the church into chaos. Wisdom demands that he keeps his own views to himself.

There is another reason why modern prophets should exercise serious consideration before staking their divine eloquence on one political party and not another. The idea of a secret ballot! God, for sure, understands that people have a duty to exercise their universal suffrage privately. And it is not the job of prophets to provide preferences for political candidature. But could they guide, of course, yes. Prophets, pastors, or whatever the case may be, can guide their congregations into identifying good leadership qualities in people. They can even encourage specific individuals to seek political office of their own choice. However, it will be unreasonably unwise to point these interested candidates to specific political parties or to incite the congregation to vote for a specific individual.

Last, and by no means least, respected and credible prophets could easily sway public opinion on candidates. And it is not a mark of spiritual invisibility or great spirituality to predict an election correctly. There are always winners and losers in elections. Witch doctors, diviners, necromancers, palm-readers or even psychics can all do that. The mark of a true man of God is to hear God’s word and know when to apply it for a divine purpose. It is not to divide a nation, but to unite it and ensure it stays within order.

As to the issue of Hichilema and the 2016 elections, it depends on the electorate. God has condemned neither Hichilema nor President Lungu to fate. Here is my take on who should win 2016 elections: A political party and the candidate who will articulate a clear political agenda, define a concise platform for economic change, and marshal the electorate to actually vote on Election Day. The prospects for Hichilema are great, but they depend on defusing the perception that he is tribalistic (we know he is not) or the perception that UPND is for Tongas and Lozis; putting a strong Bemba or Nyanja second-in-command in the vice-presidential seat, preferably a woman; and attacking the PF record on economic performance. For President Lungu and the PF, the way is already paved: President Lungu should articulate his economic agenda in plain English; he should not neglect the constitution (it won him popularity when he was acting president) and his appointment of a first female vice-president, and from the Lozi tribe, was a single work of genius. But be warned, the Rainbow Party is coming strong and no-one should rule out the MMD, either.

Charles Mwewa is author of Zambia: Struggles of My People and has recently begun running a weekly column in the Zambian Eye called, “Law & Development.”