Germ Warfare against the Darker People of the Earth 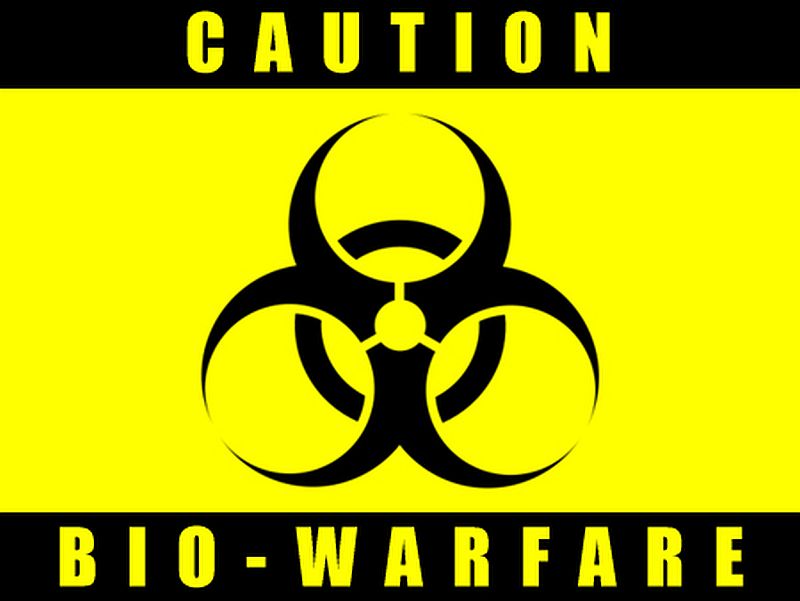 “Every race and ethnic group has an inherited susceptibility to specific ailments. In the infernal race for ‘better’ weapons, scientists from the Defense Department, the CIA, and the Kremlin have developed the ultimate horror: weapons that can target and kill or weaken specific races,” From Germ Genocide, by Lowell Ponte.

When the reports came out of India that there was an outbreak of plague, I was not surprised. Manipulators and controllers of the U.S. media were quick to rationalize the outbreak and come up with a lame explanation on what might have triggered the disease—the recent earthquake in India. An earthquake! But there have been several earthquakes in the California area which did not “trigger dormant bacteria.”

By the same token, the virus that is believed to be causing AIDS was said to originate from a monkey in Central Africa. How did this monkey virus get into human beings? Some white U.S. establishment scientists said a person in Africa was bitten by a monkey and passed the virus to other people. From there, the whole world was infected. Only arrogant racists who have no regard for the truth can give such a scientifically untenable explanation for such a deadly scourge.

Having said that, what are the hard facts about the AIDS virus? Morphologically and genetically, the AIDS viruses show striking similarities with the bovine leukemia virus of cattle and the visna virus of sheep, according to Dr. Robert Strecker. Why did establishments such as the NCI (National Cancer Institutes) and the CDC (Centers for Disease Control) insist that Central Africa was the source of the AIDS virus? They knew what they did.

Scientists such as Dr. Strecker have established an association between the World Health Organization’s (WHO’s) vaccination campaigns and the outbreak of AIDS in Central Africa. Consider what was written in the 1972 Bulletin of the World Health Organization: “An attempt must be made to ascertain whether viruses can in fact exert selective effects on the immune function...by depressing 7-S vs. 19-S antibody or by affecting T-cell as opposed to B cell function.” The bulletin continued, “...response to the virus may itself be impaired if the effective viruses damage more or less selectively the cells responding to the viral antigens.” This issue was partially addressed in a London Times front-page article of May 11, 1987 (and this was not reported in the white-owned media in the U.S.). However, in his article “WHO Murdered Africa” (WHO here refers to the World Health Organization), Dr. William Campbell Douglass writes that while the London Times should be congratulated for uncovering the smallpox-AIDS connection, their exposé was very misleading because the article states that the African AIDS epidemic was caused by the smallpox vaccine “triggering” AIDS in those vaccinated. Dr. Douglass disagrees. He says there is no scientific evidence that this laboratory-manufactured virus was present in Africa before the World Health Organization descended on Africa in 1967 with their deadly AIDS-laced vaccine. Dr. Douglass says the AIDS virus did not come from Africa. It came from Fort Detrick (now known as NCI or National Cancer Institutes). Dr. Strecker’s research also reveals that the WHO and NCI worked in collaboration to make the AIDS virus in their laboratories.

In their book, AIDS, AFRICA AND RACISM, published in 1987, Richard and Rosalind Chirimuuta wrote:

“Of all the AIDS researchers clamoring to prove the African origin of the virus, Robert C. Gallo has been one of the most determined. He is head of the laboratory of Tumor Cell Biology at the National Cancer Institutes in Bethesda, Maryland, USA, and his influence over the direction of AIDS research has been profound. In 1984 he claimed he had isolated the virus responsible for AIDS, and called it HumanT-Lymphotropic Virus (HTLV-III) but this claim has met with considerable controversy and even litigation...”

We now know that Gallo admitted on CNN that he lied and that he was not the discoverer of the AIDS virus. But what is interesting is what the facts in this article reveal, that is, the connection between Dr. Gallo’s insistence that AIDS came from Central Africa despite palpable evidence to the contrary and the NCI and what Dr. Strecker says about where the AIDS virus originates. When Dr. Gallo was told about the association between the smallpox vaccination campaign and the outbreak of AIDS, he said that was an interesting hypothesis but he did nothing about this interesting hypothesis.

Lowell Ponte informs us in his well-researched exposition that in November 1970, the U.S. Army journal, Military Review, published an article titled “Ethnic Weapons,” by Dr. Carl A. Larson, head of the Department of Human Genetics at the University of Lund, Sweden. In it he specifically discusses ways to exploit race-related disease tendencies—explicitly sickle-cell anemia and TaySachs disease—and to disrupt enzyme patterns necessary to human survival in selected populations. Dr. Larson is said to have been fascinated by one genetic difference among humans in particular, that only those of European heritage have body enzymes that allow them to drink large amounts of milk as adults. Indian, Asian and African peoples lose this enzyme in adulthood. Milk can make them ill, in some cases kill them—a fact little understood by humane missionaries who sent food shipments full of powdered milk to Africa, said Ponte.

How ironic that the press in South Africa reported that the government of Mr. Nelson Mandela was forced to import milk powder to maintain its feeding scheme following the sharp increase in prices of domestic dairy products. (This story came from the Business Day of August 17, 1994) Canada’s Globe & Mail (Oct. 26) reported that the South African government approved the use of Bovine Growth Hormone in milk. This drug is banned in Western Europe and some states in the U.S. It has not been approved in Canada. The Business Day of August 9, 1994 also reported that the African National Congress planned to commission two independent studies—one by the World Bank—on synthetic fuel producer Mossgas. African leaders should come to grips with the fact that for them to successfully overcome problems of imperialism and neo-colonialism, they will have to work hand-in-glove with progressive people of African descent in the Diaspora.

Still on the issue of germ warfare, Ponte writes that within the U.S. Defense community, it has for years been rumored that the CIA has been bombarding the Soviet Union with cancer. Instead of missiles, it has used the huge shipments of wheat, subtly infected with types of mold known to produce carcinogens and other toxins. Ponte continued to state that this could have been done even more easily with food given or sold to the world’s poor nations. In 1971 the CIA smuggled swine fever virus via its bases in Panama into Cuba. In 1962, a Canadian technician said the CIA paid him $5,000 to infect Cuban turkeys with Newcastle disease. The Canadian took the money but refused to carry out the mission. Cuban intelligence officials told Ponte that in 1973 they had expelled a United Nations scientist from India who attempted to infect their sugarcane fields with a red mold fungus. When interrogated he confessed he had been paid by the CIA to do this, Ponte reported. In the late 1970s

Botswana cattle were suddenly infected with foot-and-mouth viral disease which temporarily crippled Botswana’s economy and it is not difficult to figure out where this disease came from. Ponte says the Pentagon acknowledges that it continues to carry out “defensive” research into germ weapons. He says it is time U.S. lawmakers ask the military how it rationalizes its research into race-oriented diseases and chemical differences among human beings. He concluded by saying, “I believe it’s time Congress ordered a halt to all such research.”

Let us all call on our countries to get rid of ethnic-specific weapons and weapons of mass destruction because we do not need them. The White racists who are planning Black annihilation should stop their madness!

The author sam412d@gmail.com is a freelance writer.

This article has been read 11,930 times
COMMENTS