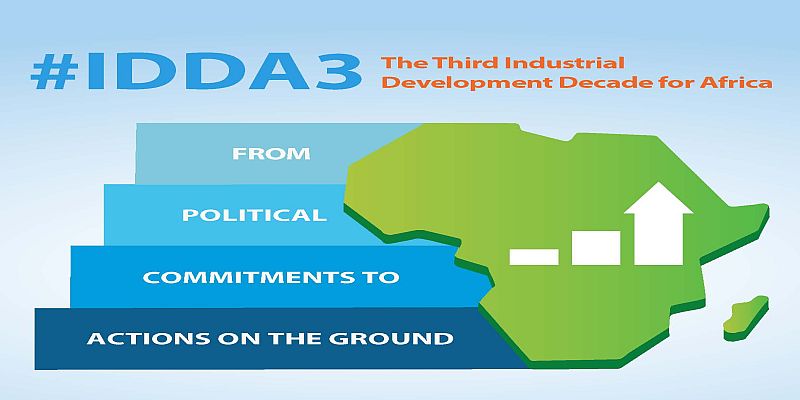 Africa remains the poorest region in the world; with the highest number of Least Developed Countries, even beyond 2025, when the Third Industrial Development Decade for Africa will come to an end. With this situation comes economic vulnerability, low income and low human development levels among our people across the continent. Industrialization is key to meeting all the three challenges.

Mobilizing partnerships for Africa’s industrialization with a strategic focus on raising adequate resources for the implementation of the Third Industrial Development Decade for Africa is key to enabling us make focused interventions that are necessary for the rapid industrialization of Africa.

From political commitment to action on the ground and the underlying principle of inclusiveness, it is also my expectation that resources mobilized under the Third Industrial Development Decade will be deployed so as to significantly show benefits accruing to the ordinary Africans on the ground through decent employment, access to high quality, safe and affordable manufactured goods that are made in Africa, among other direct and tangible benefits.

We see the African diaspora, foreign direct investment, and internally generated resources within Africa as part of the package of resources to be used in the implementation of the commitments in the UNGA resolution on the Third Industrial Development Decade for Africa. In this connection, broader stakeholder engagement in support of Africa’s industrialization will be required and I would like to affirm our commitment in this direction.

Africa is committed to industrialization. An increasing number of African countries are designing and implementing pro-active industrial policies. Beyond policy design, there are also on-going industrialization programmes and projects across Africa in areas ranging from capacity building for industrialization to manufacture of garments and footwear as well as motor vehicles; among others. These have assisted us in registering a rise in manufacturing value added.

Although Africa currently accounts for less than 1% of global exports of manufactured goods, these efforts reflect the fact that the spirit of the African people to industrialize is alive and working. The task ahead is to give it greater dynamism through timely and effective implementation of the commitments of the Third Industrial Development Decade for Africa.

What  the African Union is doing to promote industrialization

We have the Action Plan for the Accelerated Industrial Development of Africa (AIDA) published in 2007. AIDA has seven programme clusters; sixteen (16) programmes and forty-nine (49) projects. AIDA is complemented with regional industrialization strategies of regional economic communities. Complementary strategies and programmes, either already developed or under development, include the African Mining Vision adopted by the African Union Heads of State and Government in 2009 to promote added beneficiation from the continent’s vast mineral resources.

In 2012, the African Union Heads of State and Government adopted the Action Plan on Boosting Intra-African Trade (BIAT) with seven clusters, one of which is focused on developing productive capacities as well as addressing supply side constraints.

We are also in the process of designing a commodities strategy to accelerate value addition. Furthermore, we are in the process of designing a small and medium enterprises strategy to mobilize the entrepreneurial spirit of our people, especially the youth and women. With adequate incubation and policy support, some of the SME businesses can transform into globally competitive enterprises. We aim to roll out the commodities and SME strategies by January, 2018.

As a way of creating a large and globally competitive African market, as well as operationalizing the Action Plan on Boosting Intra-African Trade, we are also in the process of finalizing negotiation of a legal instrument by December this year to facilitate establishment of the Continental Free Area which will create an integrated market of 1.2 billion people with aggregate GDP of about US$3.4 trillion. The Continental Free Trade Area will, among others, create policy space for Africa’s industrialization and structural transformation. Currently, a large component of intra-African trade is in manufactured goods like motor vehicles, cement, fertilizers, cleaning preparations, essential oils for perfume materials, and iron and steel.

There is also thriving cross-border informal trade in a wide range of products like processed foods and drinks which we will be regularized under the Continental Free Trade Area. Building on these intra-African trade exchanges, a key element of the Continental Free Trade Area programme is the development of regional value chains which will promote intra-African trade in both intermediate and manufactured goods.

The development of regional value chains will in turn promote, among others, further development of agro-processing, mineral beneficiation, development of pharmaceuticals and energy resources, inter-alia. Let me stress that enhanced success in agro-processing would progressively transform Africa from being a net food importer to a net food exporter. Currently, Africa’s food import bill stands at US$35 billion per annum. Agro-processing and other aspects of industrialization will over time, greatly contribute to generation of decent jobs and in the process, lead to poverty reduction and human development on the African continent.

We are planning to make the Continental Free Trade Area more attractive by coming up; beginning in 2018, with annexures to the legal text that will deal with issues of competition, intellectual property rights and investment. With a large and attractive market, and a growing African middle class, we expect increased African and Foreign Direct Investment in textiles, electronic and other consumer goods and; inter-alia, manufacture or assembly of motor vehicles.

I would also like to add that when implemented, the Continental Free Trade Area will increase Africa’s share of global trade from the current level of 3% to 6%, within a decade, which was the global share that Africa had in 1964. We are also pursuing win-win outcomes in the Continental Free Trade Area. This, in itself, is a process of inclusiveness, which is a core element of both the United Nations Sustainable Development Goals and African Union Agenda 2063.

The African Union interacts with, and listens to the African private sector. It is our key partner in sustainable development and a source of investment, innovation and jobs, among others. In September this year, we co-sponsored a meeting on the Continental Free Trade Area with the Pan African Chamber of Commerce and Industry. We shall have a similar event with the Afro-Champions Initiative which works to increase the presence of leading African enterprises in African countries and other parts of the world. We are also working with the African Export Import Bank to revive the All-Africa Trade Fair as a means of bringing African manufactured goods closer to the African people.

Furthermore, we have the African Economic Platform, whose inaugural meeting was held in March this year in Mauritius. The Platform brings together African governments, the private sector, civil society and academia to discuss leading issues on African development such as meeting training and skills development challenges and making such training and skills development more responsive to the needs of business on the continent.

As a continuing process of private sector engagement, the African Development Bank will inaugurate the African Investment Forum before the end of this year. We are in discussions with our sister organization to come up with an arrangement where these two events will in future be held back to back; with the African Economic Platform serving as the dialogue segment while the African Investment Forum will be the transactions segment. This arrangement, if realized, will save time and money for both the organizers and participants.

Before concluding, let me make two quick points. The first one is that the industrialization of Africa and its attendant sustainable development is positive in many aspects. It will also contribute in stemming the tide of illegal migration by our youth and the related danger of their exposure to being victims of human trafficking. In addition, it will consolidate Africa’s efforts in promoting peace, stability and security on the continent.

The second point is that we fully recognize that industrialization requires supportive investments in transport and communications, logistics, e-commerce, training and skills development, research and development; among others. A partnership among governments, the private sector and training and educational institutions is key to developing and sustaining these investments. These are areas where Africa will also require support.

In a spirit of partnership, we call upon the international community to support financing and implementation of the UN General Assembly Resolution on the Third Industrial Development Decade for Africa.

AU Commissioner for Trade and Industry.

This article has been read 2,340 times
COMMENTS