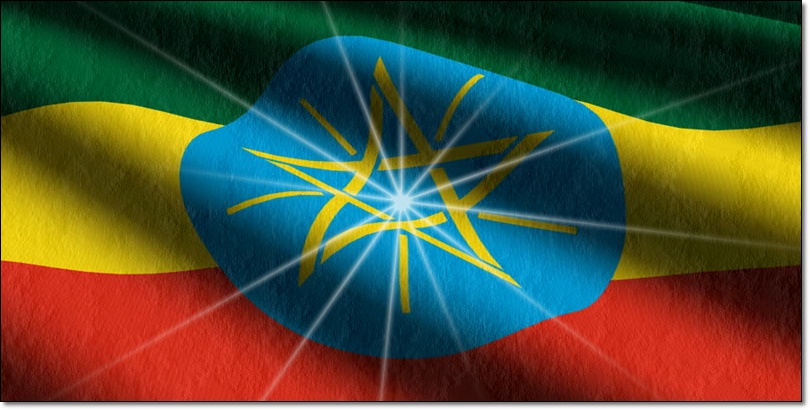 Most of the modern things in Ethiopia, like cars, airplanes, trains, telecommunications, newspapers, typewriters and such like, were introduced by King Menelik II. He brought these things for the country as a whole, not just for one group. Since then, it appears progress has slowed in most areas or purposely denied as is the case of your own city of Debre Berhan and the town of Ankober where King Menelik II used to lived has been denied a paved road and development in the adjacent areas; in an apparent attempt to deny or erase Menelik great contributions to Ethiopia and Africa; instead only focusing on the negative.

This is why the truth matters. If we cannot deal with the truth, a nation cannot move forward as a nation.  A nation means its people. The people of Ethiopia for today and tomorrow are YOU, the young people in this room and throughout Ethiopia. When I look at you, I see myself in you so when I give you this advice, I am considering it as good advice for myself as well. You are all the children of someone else; but yet, you are the future of all of us! You are the leaders of tomorrow’s Ethiopia and as such, you deserve the best advice possible. I hope to contribute to that—knowing that the best advice must be grounded on truth.

Is truth important; and if so, why? Can Ethiopia become a free and just society without truth? As Ethiopians, we have all seen the efforts to silence and criminalize critics and truth speakers. Censorship, media control, repressive laws, propaganda, Political imprisonment, torture and the thousands of Ethiopians forced to flee the country all speak to the endangered state of truth in Ethiopia in the last decades.

The amazing emergence of Prime Minister Abiy Ahmed and his team of reformers have now freed thousands of political prisoners and created an atmosphere where truth is flourishing, opening a door that has been blocked for many years. These initial steps are bold and impressive; however, the changes being made are not secure and will only face more challenges in the future.

In a post-repressive society like ours, can we Ethiopians build a strong foundation of freedom and justice and make them sustainable for the future without a high view of truth?

Dr. George Ayittey, a Ghanian political economist, author and strategic leader in bringing democratic change to Ghana, and also a friend, will emphatically say, “No!”  In a working seminar he facilitated for the Solidarity Movement for a New Ethiopia (SMNE) and in his book, Defeating Dictators, he asserts the need to dismantle the structures of dictatorship in order for change to be sustainable. Furthermore, he advises, there is an order to the reforms that must take place. The first to go in an emerging dictatorship is access to information and the freedom to express it; therefore, he asserts, the first reform must be to restore it in order to bring sustainable change.

Truth and the pursuit of truth are related to free speech, the free flow of information, and the freedom to assemble. The question is: how does a post-repressive society open the door to freedom and justice after decades of authoritarian governance where truth and truth tellers were regarded as the enemy? How can the right to speak freely be reinstated and strengthened, even when and where it may still be unpopular or resisted? In other words, where are the barriers that may still need “dismantling?” How can we avoid slipping into establishing new restrictions that may sound good at first, but in practice, lead to silencing truth and its expression? How can a people-driven process better secure the right change for all Ethiopians?

Opening the door to sustainable freedom and justice

1)  Principle-based integration of truth, justice and freedom into our institutions that ensure inclusive rights for all citizens

In a healthy society, its institutionalized structures support a legitimatized process of truth finding and the upholding or restoring of freedom and justice. This includes the formation of an accepted, people-driven process to ensure best practices and outcomes.

A free and just society seeks to integrate truth, freedom and justice into all its public institutions, inclusive of all its citizens, and not alter its practices based on favoritism or self-interest. This means upholding the value and rights of every citizen, putting humanity before ethnicity, gender, skin color, age, cronyism, political viewpoint, social status, religion or other differences. Transparency, accountability and a process for appeal and corrective action, in the event of possible violations, should be ensured. This should include citizen involvement and approved action plans to maintain overall transparency and accountability.

Oversight is critically important at this time of transition where truth, transparency, and accountability may be the best defenders of inclusive and sustainable change against those seeking to maintain or to achieve dominance over others.

2) Rescind current laws and practices restricting truth, free speech and the free flow of information and avoid passing future laws that do the same

In our recent past, truth and people of truth became the primary targets for repressive action. In authoritarian societies, truth brings light on deeds that thrive in the darkness. Those who spoke out or criticized the status quo filled our jails, detention centers and prisons. In fact, at one time Ethiopia held more political prisoners than most other African countries.

Who were those in our prisons these last years? Many of them were tellers of the truth, whether journalists, religious leaders, activists, community leaders, youth protestors and countless others who confronted the wrongs of our society when those in power did not want to hear it. They were seeking to correct or improve a flawed system that rewarded power holders with impunity while labeling some of our most courageous voices as terrorists and giving them years in prison or life sentences for speaking the truth.

Such laws as the repressive Charities and Societies Proclamation targeted civil society, forcing the closure or downsizing of almost every independent civic organization. It silenced organizations advocating for human and democratic rights, the promotion of equality of nations, nationalities, people, gender and religion, the rights of the disabled and children, the promotion of conflict resolution and reconciliation and the promotion of justice and law enforcement services. Over two thousand organizations closed—but due to the desire to look good to the outside, pseudo-organizations under the control of the government took their place, appearing to represent the people while undermining their freedom and rights.

The vague Anti-Terrorism law criminalized free speech and resulted in the politically-based imprisonment of large numbers of journalists, human rights activists, opposition leaders  and others critical of the government.

Laws affecting freedom of the press silenced the media, including Internet censorship, particularly of opposition websites.

Thankfully, recent changes made by Prime Minister Abiy and others have already emptied our prisons, but with those significant changes, these laws that attack the truth should now be rescinded and any newly proposed laws closely examined so that truth can be protected and do its job of better securing sustainable freedom and justice.

For example, the newly proposed law on hate speech may sound good at first; however, who decides on what defines hate? Who decides what is hateful enough to take action? Does it include criticism? Will vying groups suppress truth that is not in their favor? What if what is said is true? What if what is said reveals evidence of a crime? What kind of action will result to penalize its speakers? Will it fill our prisons once again? Will there be hate police, monitoring private speech? If it is censorship in the public square, will it be used to silence opposing views and to undermine needed dialogue? Will it include speaking the truth about issues of concern that some do not want to hear? Who will monitor this speech and who do they represent? What is the result; more freedom or less? Is the protection of free speech preferable to someone else deciding what they or their group do or don’t want said out loud? How can the right to speak freely still be ensured even when it may be unpopular or resisted? We must be very careful or we will return to the former criminalization of truth with the use of new words that still are meant to silence truth and truth speakers.

3)  Develop a people-driven process to support current reforms and to advance dialogue leading to sustainable truth, freedom and justice in the country

We should recognize the remarkable efforts being made in Ethiopia to bring reforms and corrections to a system that has failed to address the needs of the people for many years. Strengthening our government institutions in a way that better ensures inclusive rights, effective service, transparency and accountability is the shared job of the people of Ethiopia and its government and institutions. Leaders with integrity will build trust among the people; yet no one person, or even a few, can do it alone.

I have talked with people from all over the country and have been impressed with some of the local remedies to conflict, injustice and harmony in the community. The collective wisdom of these people is a great resource for our local, regional and federal challenges. Let us utilize them more effectively as has been done in other countries in Africa. Issues involving such topics as land and property rights, resources, environment, development, education and business development are only a few of the areas for dialogue that can lead to shared planning rather than to conflict and violence.

In all of these, truth will play a role. It may not always be wanted, agreed upon or easily discerned; however, it gets the issues out on the table for open discussion that can be civil. Another principle of the SMNE is to talk to each other rather than about each other; humanizing the other and making it easier to find shared solutions.

On a larger scale, a number of African countries have successfully followed the process of establishing a Sovereign National Conference to help guide, direct and contribute to the changes needed in their countries. In South Africa, it led to the Truth and Reconciliation Hearings; in Ethiopia, it may be shaped differently, but should result in reconciliation and the restoration of justice. A group of respected individuals should explore the planning of such a conference. They should be independent, but work in cooperation with the government and various institutions.

A high view of truth can be a primary source of protection during this process of change. As I was coming to the city of Debre Berhan, I had the great opportunity to learn much about this area from the person driving the car. I learned how the lines between Ethiopian regional states are often not easily discernible due to the intermingling of people. I heard how the city was an area of resistance back in 1991 and was punished for it; lacking development for years and only achieving it more recently due to investors from the Diaspora.

I heard how the people in this area were divided and fearful of violence only a year ago, but how more recently, they were dancing and singing together as people first, putting their differences aside. I heard how many of you attribute the emergence of PM Abiy and his new reform team as coming from a door that could only have been opened by God, believing this is an amazing opportunity, a  miracle and a gift given to the people to use well, for the good of all.

Truth can frees people and nations from bondage. Universal truth works, but it must embraced in the hearts and minds of the people. Let us become the new people in a New Ethiopia!

This article has been read 2,621 times
COMMENTS